It’s the biggest Umbertine Fort of the Messina Strait, both in dimension and architectural value. 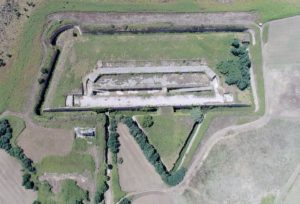 The Fort has a quadrangular shape, with the left side being non aligned and forming a sort of rectangular trapezoid with a deep moat circling the triangular-shaped front.

The moat is protected by two caponiers: a traditional-shaped one protecting the northern arm of the Fort, and a semicircular one protecting both the western and southern fronts.
The front positions were built to cover a 120° area over the Strait of Messina, corresponding approximately to the area going from Villa San Giovanni to Torre Cavallo.